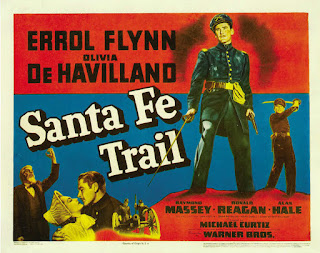 Well, this is a cracking action adventure movie - though what it's got to do with the Santa Fe Trail is quite beyond me. They talk about it a couple of timees, but nobody ever actually goes to Santa Fe.

This movie is really about the abolitionist John Brown, Bloody Kansas and the Raid on Harper's Ferry. The heroes of the film are a group of young officers, fresh out of West Point Military Academy who are posted to Kansas to try to keep the peace. They get engaged in a variety of escapades, fights and romances. Playing these heroic, dashing soldiers are Errol Flynn, Ronald Raegan and David Bruce. Clearly the producers wanted to spice up the audience appeal so as well as including Jeb Stuart [Errol Flynn] and Phil Sheridan [David Bruce] (who really were there) they include George Custer [Ronald Reagan] who wasn't. They also manager to shoehorn into the story Robert E. Lee [Moroni Olsen] and Jefferson Davis [Erville Alderson]. No doubt it all helped to pack in the audiences.

The villain of the piece is John Brown, magnificently played as a wide-eyed religious zealot by Raymond Massey. Van Heflin plays a suitably sneaky traitor very well indeed. Olivia de Havilland is her wonderful best as Flynn's romantic interest - though it must be said that she is rather unconvincing in her early appearances as a tomboy. The comedy subplot is wonderfully done by Ginn Williams and Alan Hale as a pair of wagon drivers with aspirations to join the army, though lacking any suitable abilities. The film shows its age in the way it treats the slave characters. Ostensibly the entire plot is driven by Brown's abolitionist beliefs and the way that the helps slaves escape north to free states. We see several of these slaves, but they don't say much and are little better than stock characters - a film these days would make much more of them.

The story gallops along a a fast pace with lots of action and twists to the storyline. I'm not a great expert on Brown and his exploits, but I'm told that the film has a lot of inaccuracies in it. Never mind, it is a cracking adventure film. Enjoy.

You can watch it HERE.