You can buy copies of all my books that are in print on Amazon.

I have copies of the following books in stock and will sign or dedicate copies as you wish. Please email me on rupert@rupertmatthews.com for details of how to order.

Jane Austen and the Military

Jane Austen is one of Britain’s best loved authors. Her books sell worldwide in vast numbers, while movie and television adaptations are regularly among the most watched dramas around.
Within her books, Austen includes several characters who are (or have) been in the military. This is not surprising as through most of her writing career Britain was locked in a  titanic struggle against Napoleonic France in which battles such as Trafalgar and Waterloo were fought. But what does she tell us about the military of her time, and how accurate are her accounts?
In this book we look at what Jane Austen tells us about the careers of her key military men, and analyse them to reveal the facts, errors and misunderstandings that Jane Austen makes.
Characters dealt with include: Colonel Brandon (Sense & Sensibility); George Wickham (Pride & Prejudice); Colonel Fitzwilliam (Pride & Prejudice); Mr Weston (Emma); William Price (Mansfield Park); Mr Price, snr (Mansfield Park); Frederick Wentwork (Persuasion); Admiral Croft (Persuasion); James Benwick (Persuasion). 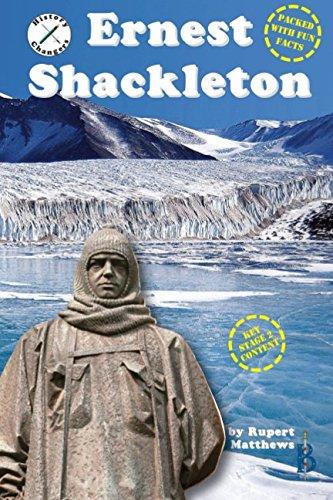 The greatest of all the polar explorers was Ernest Shackleton. Shackleton went into the vast unknown southern seas four times, meeting with triumph and disaster. Through bravery, endurance and careful planning he was able to survive where others would have died, saved the lives of his men and brought back valuable scientific knowledge. In this book we learn about his life, his travels, his companions and his achievements. The “History Changers” series of books is designed to be compatible with the Key Stage 2 History curriculum for those aged 7-11.

The History of Buttons

We tend to take buttons rather for granted these days. They are the ubiquitous fastener in all our wardrobes. We do them up in the morning without much thought. They are cheap and plentiful, but it was not always like that. Time was that buttons could feature silver, gold and diamonds. In fact the humble button has been essential to the Western World for centuries. It made possible tailoring and fashion as we know them today. Without the button we would be quite undone.
The button has a long and distinguished history. It is a history that takes in savage barbarians, fat German ladies, kind Spanish noblewomen, Jacobite spies, the soldiers of the British Empire, and a number of anonymous genius inventors who added their inventions to the story of the humble button.
This book tells the story of one of the most important, but most neglected elements of modern fashion.

Some people call him Father Christmas, others name him Santa Claus, but whatever name he goes by we all know him. He has become the living embodiment of the Christmas Spirit. But where did this loveable old boy come from? How old is he? Has he always been so jovial? And what about the elves, reindeer and North Pole?
Many people think that Santa was invented for an advertising campaign by Coca Cola. Others date him to Victorian times. A few may place him back in the 18th century or even Tudor times. But they are all wrong. He is much, much older than that.
£5

A History of Christmas Food

Christmas today is a time of feasting, drinking and all round merrymaking. We serve vast meals of food specifically associated with Christmas - roast turkey, sprouts, roast potatoes, parsnips, bacon rolls, pigs in blankets, cranberry sauce and bread sauce. All that is in due course cleared away to be replaced by Christmas pud and mince pies.
But it hasn't always been like this. Christmases of years gone by featured some very different foods and drinks. So what did our ancestors eat and drink on the greatest feast of the year?  Read on - and why not try out some of the period recipes yourself.