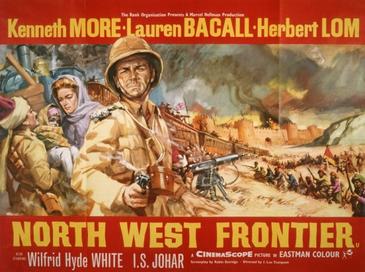 I remember watching this film with my dad many years ago. As I recall it, the film was set on a train on which the heroes were racing to escape the villains. I suppose that way back then the subtleties of the plot and certainly I would have missed the religious undertones and post-imperial angst.

Anyway, the film starts in a fictional princely state on the North West Frontier of the Indian Raj in 1905. The Maharajah and most of his subjects are Hindus living in a generally peaceful agricultural state. The hill tribes are, however, wild marauding pillagers who have been stirred up to a peak of religious fervour by a Moslem fanatic preaching holy war. A somewhat stereotypical background for a film set in the Raj, but let's just take that as read.

In what serves as a prelude to the main action, Kenneth More's Captain Scott and his men escort the maharajah's little son and heir and his American governess Catherine Wyatt [Lauren Bacall] away from the strife-stricken princely state to a British military base nearby. Soon after they leave the jihadis fight their way in to the palace and kill the maharajah. Now all that stands between the locals and religious civil war is the little boy.

The Moslem fanatics follow the boy and lay siege to the military base. Convinced that his base will fall, the commander [Jack Gwillam] decides that Scott and Wyatt must take the prince to safety at the city of Kalapur where there is a much larger British garrison. The last train has already gone, but Scott finds a tatty old shunting engine and an equally derelict passenger carriage. The two are patched up and off they go.

On the train are Scott, Wyatt, the prince, two soldiers plus: a Dtuch journalist [Herbert Lom], a retired British merchant [Wilfred Hyde Wight], Lady Windham [Ursula Jeans] and an arms dealer [Eugene Deckers]. The train driver Gupta is played by Inderjeet Johar, who does a wonderful comic turn as an uneducated engineer utterly devoted to his engine. This is a top class cast, and each of them plays their role to perfection.

It becomes clear that somebody on the train is in cahoots with the rebels and is intent of killing the boy prince.

As the journey goes on, the train is ambushed, chases, faced by a sabotaged rail and faces all sorts of hazards. It is a dashing and exciting adventure story which in between times does touch upon the role of the British Raj in India, the role of princely states and the play off of religious and ethnic groups. No doubt a modern film [if one were ever made set in the Raj with a Britis hero] would do a better job of explaining these difficult issues, but for 1959 this film makes a pretty good fist of it.

A great adventure movie. And you can watch it HERE.