Exeter Cathedral – well worth a visit

I recently spent a weekend in Exeter. I spent almost an entire day in Exeter Cathedral. It is a wonderful building packed with memorials, beautiful artworks, quirky corners and – if you time it right – some wonderful music praising God. There is also a quiet chapel set aside for prayer.

Here are some photos I took on a recent visit. I suggest you pay a visit yourself as quickly as you can.

The Norman cathedral construction began in 1112, presumably at the east end and was consecrated in 1133, by which date the choir, transept and first two bays of the nave were probably complete. As detailed above, remains of the Norman building can be seen in the massive towers. By 1160 the nave and west front were complete and a cloister and Chapter House were added between 1180 and 1244.

During the 1270s, a new project began to replace the entire east end, starting with the east end chapels. This work is documented by a very extensive series of fabric rolls. Work advanced slowly, with the retrochoir, presbytery and choir being built in the 1290s. The original choir elevation had two storeys, but was later modified to three, presumably after the arrival of Master Roger in 1297.

By 1328 the church was complete to the first two bays of the nave, where a design change in the vaults is visible. During Master Thomas of Witney's time the east cloister walk was begun (1318-25) and the nave, west front and north cloister walk were probably completed (c.1328-42).That the present west front is on the same site as the Norman predecessor is indicated by the narrowing of the nave bays towards the west, squeezed to meet an existing feature.

The image screen across the west facade and the chantry chapel of nBishop Grandisson located within the west front were probably designed by William Joy, who succeeded Witney as master mason in 1342 but seems to have died in 1347, possibly from the Black Death. From 1377-1414 the east, south and west cloister walks were finished by Master Robert Lesyngham, who probably also designed the great East Window (1390-92).

The architecture of Exeter Cathedral at first appears remarkably harmonious with the continuous run of vaults extending from west to east. Although the bays are irregular in size, the plan is throughout based on a division into ninths. There is also a wonderful array of tracery designs in the clerestorey windows. More detailed analysis nevertheless reveals a number of changes, including the decision to adopt a three-storey facade with a triforium more typical of cathedrals than the previous two-storey design. 3-D scanning of the vaults has also revealed numerous changes to the curvatures of the ribs. 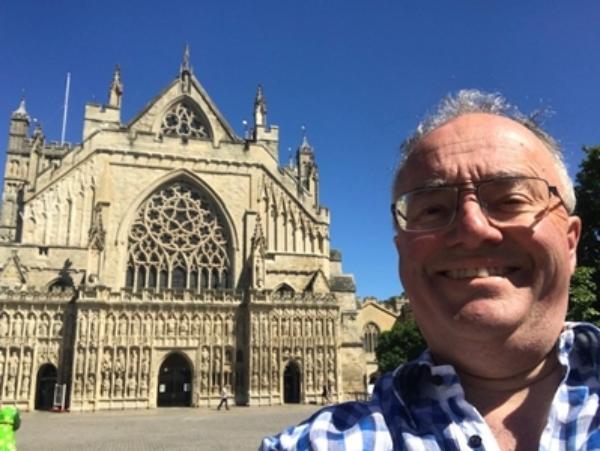