I wanted to visit Deene Park because of my family link to the 7th Earl of Cardigan who had lived here – and whose family still does. Back in 1854 he was the general commanding the Light Brigade of cavalry in the British army while a collateral ancestor of mine was a corporal in the 17th Lancers. A humble link, but a real one nonetheless.

Deene Park is a wonderful eclectic mix of architectural styles, having evolved through the centuries.  Before the Norman Conquest and for 150 years afterwards the Manor of Deene belonged to the Abbey of Westminster and was used occasionally by the Abbot.  In about 1215 it was let for the first time to Sir Ivo de Deene for the annual rent of £18 and an obligation to provide hospitality once a year for the Abbot and his household an agreement which continued unaltered for 750 years.

Various families, including the Colets and the Lyttons leased the property until it was acquired in 1514 by Sir Robert Brudenell (1461-1531), later Chief Justice of the Court of Common Pleas.  It has descended through the male line to the Brudenells of today who continued to pay the rent of £18 until 1970, when the property was enfranchised from the Church Commissioners for eleven years’ worth of rent – £198!

The house was built over six centuries and grew from a substantial quadrangular-plan medieval manor into a Tudor and Georgian mansion, whose main front now faces south across the Park and Lake.  Successive generations have altered the house to suit their needs and have helped endow the collections within, which contain Tudor Manuscripts, Old Masters and Family Portraits, porcelain and much military memorabilia from the Crimean War.

After the Second World War, Deene had merely two bathrooms and electricity had only just been put in.  The legacy of the billeting during the war, coupled with a lack of maintenance had left the house in a very bad condition with dry rot and carpets and curtains in rags.  Edmund Brudenell opened the house to the public and he and his wife Marian began the much needed restoration work of re-plumbing, rewiring and re-decorating.  The refurbishment is testament to their wise and clever life’s work and to Mrs Brudenell’s exquisite taste.

Recently the house has gone through a major refurbishment of re-roofing and a new and vital wood chip boiler, sourced from our own sustainable woodlands, for much needed central heating. The collections within are on a major programme of restoration and maintenance.
The visit includes the gardens where there is much to delight with restored gardens and new gardens opened up and work is starting on the Parkland restoration.
It is to be hoped that with the help of visitors the house and garden can be preserved and continue as a home lived in by the family who have cherished it since 1514.

You can find out more about the house and how to visit at their website: 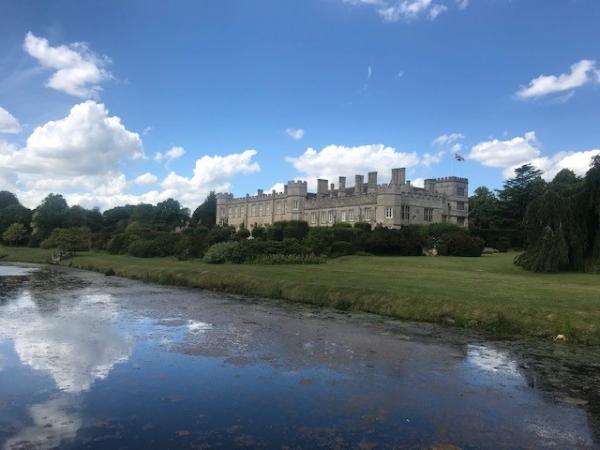 Busting Stereotypes - Women at War
Yesterday I gave my talk on "Women at War" for a Women's Institute Group. I always enjoy this talk as it breaks through so many stereotypes - about women, warfare, Greeks, South America, the Royal Navy and more.