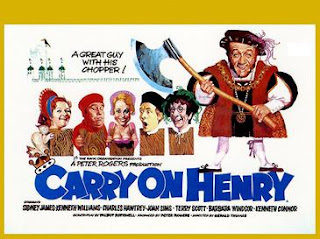 Nobody ever watched a Carry On film expecting accurate history. Which is just as well because you don't get much of it in this offering.

To be fair to the producers, they don't even pretend. The prologue annonces that the story is based on a manuscript by William Cobbler and so it is a load of old Cobbler's. Having thus set the tone, the film launches into the ribald adventures of the lascivious and greedy Henry VIII [Sid James], the sanctimonious, hypocritical and corrupt Cardinal Wolsey [Terry Scott] and the deviously crooked Thomas Cromwell [Kenneth Williams].

In fact the storyline is very loosely - very loosely - woven around some incidents in Henry's life. We kick off with the execution of an unnamed queen [Pasty Rolands] and then lurch into marriage with Anne of Cleves - although here the character of an unwanted wife is not Anne from Germany but Marie from France [Joan Sims]. Her habit of chewing raw garlic puts off the fastidious Henry who tries to avoid consummating the marriage - although the interference of Marie's cousin, King Francis of France complicates the issue. Henry meanwhile is chasing any available busty young lady, with assorted comic slapstick results.

Next Marie of France transforms into the character of Catherine of Aragon with Henry becoming bored with her just as a new, busty young lady appears at court - Bettina of Bristol [obviously], played by Barbara Windsor [equally obviously]. Young Bettina displays her assets to get Henry's attention but refuses his advances until they get married - involving Henry in increasingly surreal efforts to divorce Marie.

But I am being far too serious in looking for historical parallels. This is a bawdy, slapstick farce of the first order. In my view, this is one of the better Carry On movies.

It is sumptuosly staged - the costumes were left over from the far more serious and high-minded Richard Burton moive "Anne of a Thousand Days". And the exteriors were shot at Windsor and Knebworth. The film has a huge cast - most of them mainstays of British comedy such as Peter Butterworth, Bill Maynard and Margaret Nolan. Though, oddly, most of them get only one or two lines of dialogue. 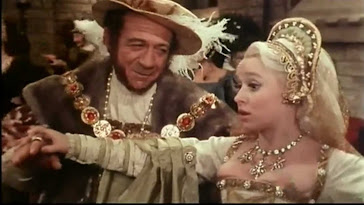 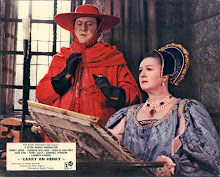 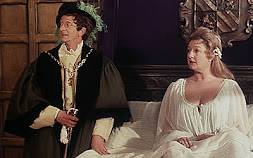