On a recent visit to Avebury in Wiltshire to see the magnificent henge there, I walked up a nearby hill to visit West Kennet Long Barrow. This is a burial mound where dozens of people were buried over a period of centuries some 4,000 years ago.

The barrow may have been constructed in at least two phases, as there is a noticeable bulge halfway along the longitudinal axis accompanied by a subtle change in direction.

Some cremations and the partial remains of at least forty-six individuals – both male and female and of all ages – have been found inside, together with grave goods including pottery, beads and stone implements such as a dagger, dated to between 3000 and 2600 BC.

The tomb was closed sometime around 2000 BC and the main passage filled with earth, stones, rubble and debris. The forecourt was then blocked with sarsen boulders and a false entrance of twin sarsen uprights constructed. Finally, three massive sarsen blocking-stones were erected across the front (eastern end) of the tomb.

The barrow was first excavated in 1859 and then again, scientifically, in 1955–6, after which the site was restored and the façade and chambers at the eastern end reconstructed.

It is free to visit, and a handy layby stands by the A4 to park in. 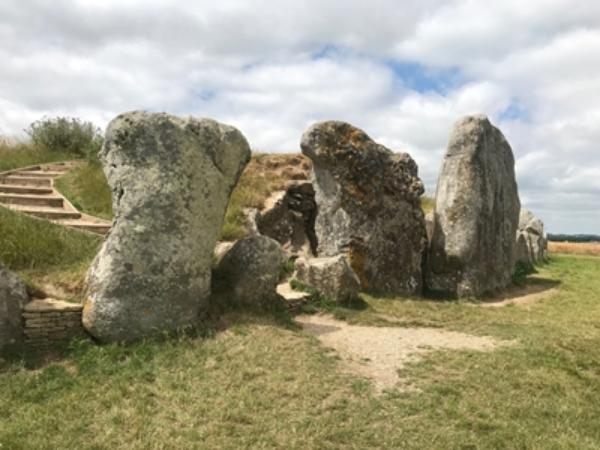