The Railway at Weston at Welland

Running roughly northeast to southwest across the countryside to the west of Weston by Welland, Northamptonshire, is a disused railway line. The rails have long since been lifted and taken away to be used elsewhere but some of the engineering works remain.

North of the village on Green Lane can be seen the massive abutments of a bridge that crossed the road here. The embankment on top of which the railway ran can be seen stretching away on either side of the road. Incidentally, the route of the ancient Roman road from Leicester to Godmanchester also crosses Green Lane here, but nothing visible is left of it.

West of the village, Welham Road crosses over the railway. Here the railway runs through a cutting so you have to peer over the edge of the bridge to look down to see the abandoned route of the railway.

This railway was a branch off the Rugby and Stamford Railway, built in the 1850s. Throughout its life the railway earned its living by transporting people and agricultural produce from the surrounding villages to the towns of Rugby and Stamford which stood at either end of the line.

The line was built as a single line, but all the cuttings and embankments were made wide enough for two lines in case they were needed. By 1879 the traffic on the line justified a second line, which was then added. By 1950 the line was no longer making a profit from local traffic. For a few years it was considered that the future lay in converting it to a through route from the Midlands to East Anglia, but that idea was dropped and in 1966 the line was closed. 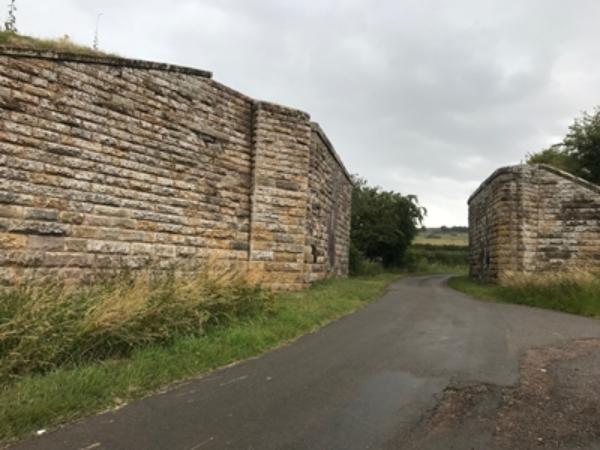