The village stocks at Bottesford, Leicestershire 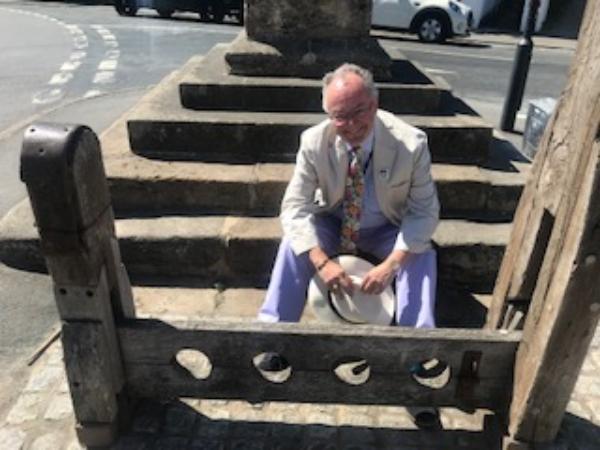 The lovely village of Bottesford is the largest in the Vale of Belvoir. Among other facilities it boasts a church, two pubs, three small supermarkets, a post office and two schools. The ford, from which the village takes its name, is to be found in Devon Lane where it crosses the River Devon [pronounced “dee-von”]. The “Bottes” part of the name in Old English for “Big House”, but that building vanished centuries ago.

This photo above shows yours truly sat at the village stocks. There is space for two people to sit side by side with their ankles in the stocks. The photo below shows the stocks and the taller post that was used as a whipping post. Those to be flogged for their crimes were tied to the tall post while punishment was carried out. These two features are thought be 18th century in date. They were certainly there in 1850. The stocks in Bottesford were probably first installed as a result of a law of 1351 which made it obligatory for all villages which held a market to have stocks and whipping post so that offenders could be publicly shamed as well as punished on market days.

In 2012 the stocks were demolished when a speeding car failed to make the corner and span off the road. Despite fears that they might have been beyond repair, the timber was stout enough to be put back in place.

Behind the stocks and post is the old Market Cross. What is seen today is only the stump of the original, which would have been perhaps 12 or 15 feet tall. The shields are now badly weathered, but would originally have boasted the heraldic devices of those families who set up the market – and so paid for the cross. Stylistically the cross belongs to the period 1280-1320, which was presumably when the market here was first held. Nobody knows when or how the top of the cross was lost, but it had gone by the year 1800 when the stump is first recorded as it is now.